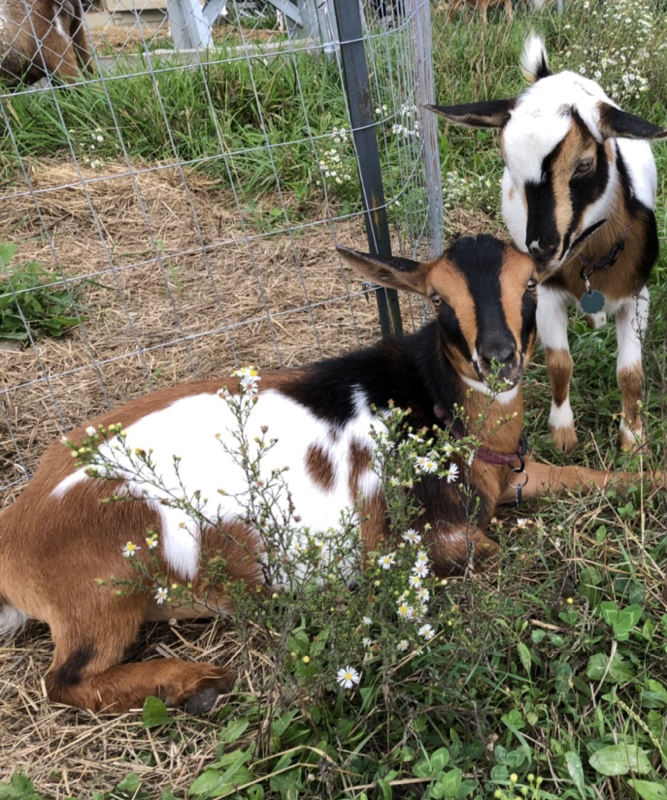 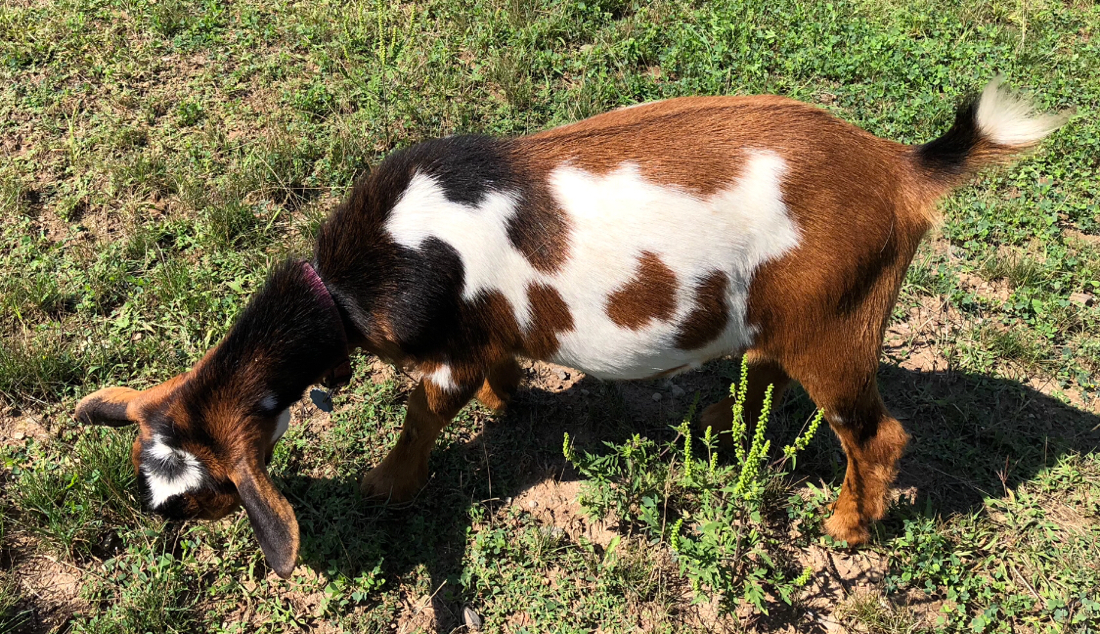 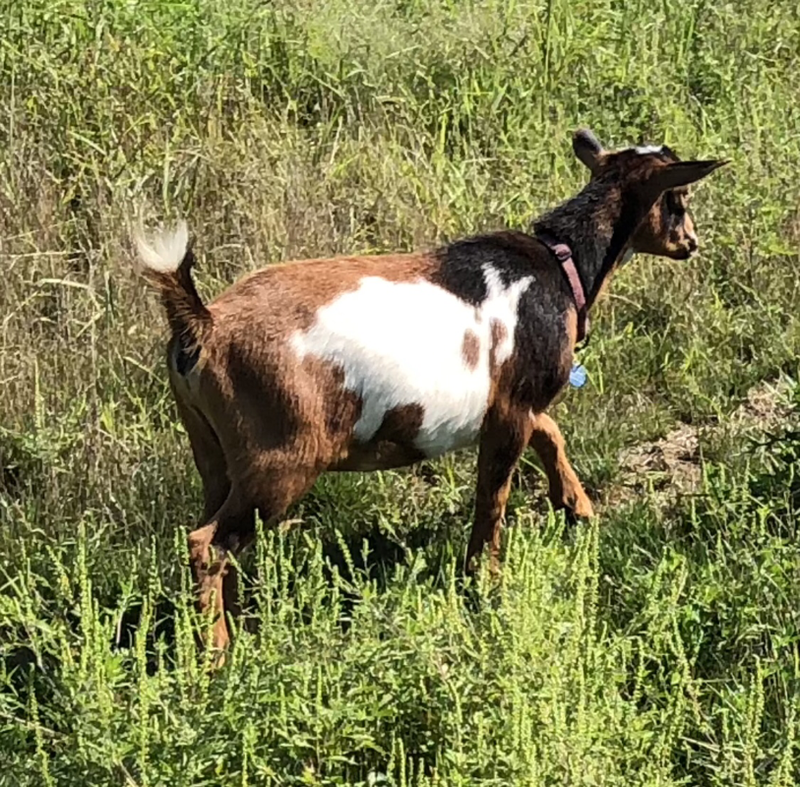 Potting Shed AYJ Tiarella, named after a woodland wildflower, is stunning doeling is out of Potting Shed Pristmatic, sired by Fairlea Ay Jackson, a US imported buck that classified at Excellent 92. She has brown eyes and her colouring is buckskin with white markings.

She comes from great show and milk production lines, with great conformation. On the maternal side, Pristmatic was evaluated at Very Good 86 as a yearling first freshener, which is excellent considering that the maximum that a doe under 3 years can receive is Very Good 89, and she was only one year old! She has a lovely udder and won 1st place twice as a yearling milker at Nationals and at the Rockton Worlds Fair in 2017. Her granddam is Potting Shed FG Maggie, who has been evaluated at Excellent 90, and has done very well in the show ring, including Grand Champion at the 2015 Rockton World’s Fair and 2nd place at the 2016 Royal Agricultural Winter Fair, where her full sister, Potting Shed FG Maxie won 1st prize. Maggie was producing 3L of milk per day at her peak as a 4th freshener. Maxie, her triplet, was classified at Excellent 91 and won Grand Champion and Best Udder in 2017, among other prizes. The triplets Maggie, Maxie, and Myrna's offspring produce a lot of milk, as well as having long lactations.

On the paternal side, Fairlea Ay Jackson was classified as Excellent 92. His dam is the 5th generation of does to classify as Excellent (EEEE 91) and to earn her milk star (5*M). She also won the title of Permanent Grand Champion. Jackson’s twin sister, Fairlea Irene, also earned her milk star (6*M) and was classified at VVEV 87 as a first freshener, and VVVE 89 as a second freshener. She was shown once, as a junior doe, and won Junior Grand Champion. His grand-dam, GCH Fairlea Marguerite 4*M, was classified at Excellent 91 as a 6 year old through AGS and EEEE91 as a 9 year old through ADGA. She has won 2 Grand Champion awards through the AGS and 3 Grand Champion awards through the ADGA, earning her title as a permanent grand champion. She came many times between 4-8lbs of milk away from being in the Top Ten Nigerian Dwarfs for milk production, an incredible feat, considering the top tens produce well over 1000lbs of milk during their lactation! Many of Jackson’s daughters have become champions in the show ring, including Potting Shed AYJ Marion, who became the 2016 East National Grand Champion. Potting Shed AYJ Marion became a Permanent Grand Champion in 2017 and was classified as Excellent 91.

You can see the lovely udders of Tiarella's relatives below! With these incredible goats in her family, we can’t wait to see how Potting Shed AYJ Tiarella will mature! 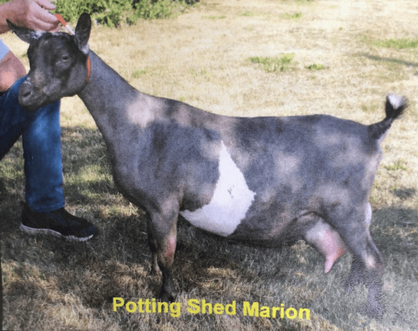 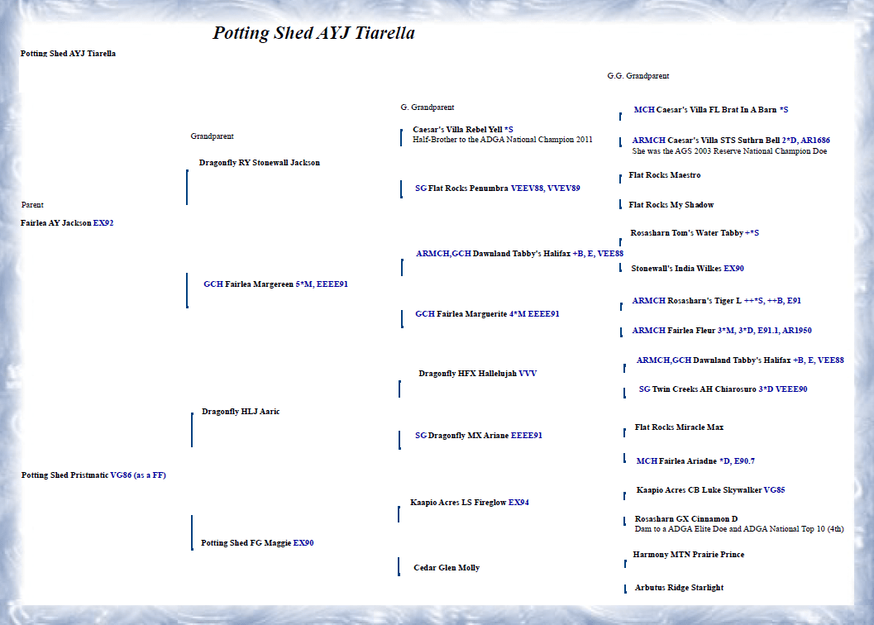