Bedrock N Brambles Framboise is a gorgeous black and white doe with lots of roaning. Framboise also has lovely blue eyes, which is a dominant trait in goats. At her peak, Framboise produced 2.5L of milk per day during her second freshening. She is a highly productive doe!

Framboise's parents both have US bloodlines, especially her sire who has mostly US bloodlines. On the paternal side, Framboise's sire's half-sister, daughter of Caprelle Cappucino won first place at the 2014 East Nationals. Goats out of the Lone Larch bloodlines do well in the show ring. On the maternal side, her dam has given around 2L of milk per day. Her grand-dam, Tripping Billies Delilah won Reserve Grand Champion and Best Udder in her age group at the 2014 East Nationals. She has also won a restricted leg towards her Permanent Championship. Her grand-sire, Sky River Meadows Hades, has earned a full leg towards his Permanent Championship. Framboise's great grand-dam, Tripping Billies Carmela, won Junior Grand Champion. Framboise's great grand-sire, Prairie Wood No-Way Jose (US imported), is a Permanent Grand Champion. His sire is a *S buck, since his dam earned a milk star and his sire is a +*B. 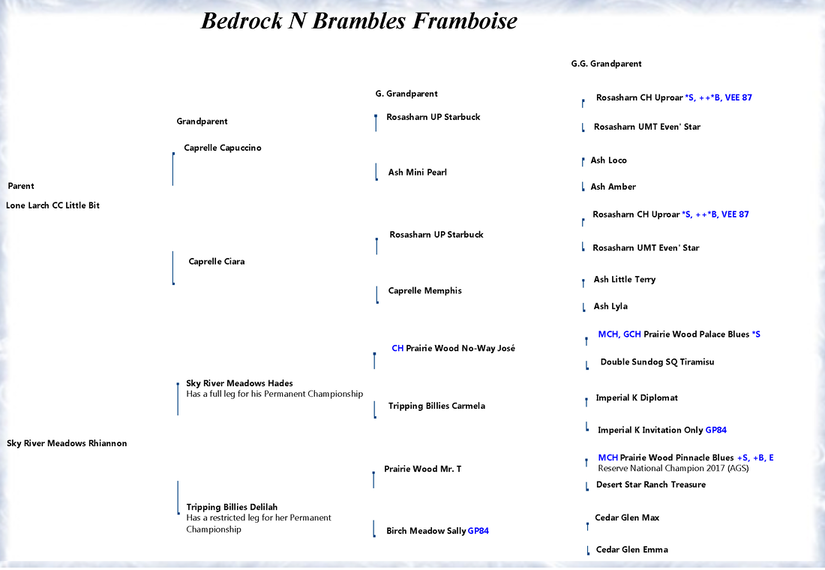