Description
​
Buck aprons are an apron worn around the waist by the buck, made with water resistant material, that prevents the buck from mating a doe. It is used by Kenyan goatherders to prevent pregnancies during the dry season, which would risk the life of the does. They were made from leather and called an olor. In order to effectively block mating, it must not be tightened too much (or it may twist sideways and allow breeding, as well as being uncomfortable for the buck) and not too loose, or the buck will be able to slip out or extend over the top. You need to check the sides and the bottom of the apron, as the bottom tends to be looser drop down more than the sides, due to the shape and weight. It is best if they have a weight in them to keep them in the right position even if the buck moves it while laying down. Buck aprons are also sometimes used to prevent urine scald.

Buck aprons allow the bucklings to nurse on their dams for longer, which is better for their health, and allows our bucks to live in a herd with the does. It also allows future wethers to be wethered later, reducing the risk of urinary calculi (see: Feeding). We have been using these aprons for years, with bucks from 5 weeks old to over 8 years old. The bucks do not bother the does. They only try to breed them when they are in heat (which the does don't mind!), and the apron blocks them. The herd is happy together and loves to sleep all cuddled together after a busy day in the pasture. We really like this method because the buck apron allows us to still control due dates, yet keep everyone together. 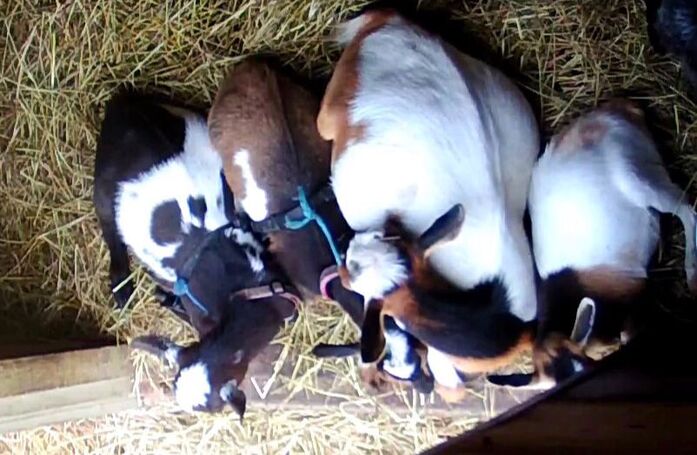 When using buck aprons, younger goats almost always need an extra strap to keep them in place, as they can slip out since their bellies do not yet block the apron as well as the adult bellies do. The way I found to be sure that the apron stays on for the bucklings is to use a collar and tie some bailing twine (or any other cord) from the collar to the apron. If you look at the picture above, you can see the blue cord running from the apron band to a collar). The cord runs from one side of the buck to the apron, to the other side of the buck. Once they are older, this can usually be removed (I've only had one adult buck that still needed the collar method). A chest strap usually doesn't work, but the collar to apron cord does. Once older, they normally no longer need the extra attachement.

Buck aprons need to be a little above the ground when worn to allow the buck to run comfortably, without stepping on the apron. You don't want it to be too short either. To get an idea of minimum length, lift your buck's front legs as if he were raising himself to breed a doe. When you have an apron, make sure it covers everything even when he is raised up! You also want to check the fit sometimes (especially when newer to the method) by lifting up the front legs a little, as the apron becomes looser in this position. It needs to fit tightly enough to prevent the buck from extending over the top, but not too tight to be uncomfortable. The design of most aprons make them looser at the bottom than the sides, so make sure to check all around.
Purchasing Buck Aprons
​
​We have previously purchased buck aprons from House of Bacchus. They are a company based in the US and have been great to deal with. We have used them successfully, however the "bell shape" that is common for most buck aprons is not ideal, so we have been making a different model for our herd. With a "bell shape", they are narrower near the top or middle. This shape also makes them looser around near the bottom of the chest band. Finding the right balance of secure while not being too tight meant checking at least twice a day. The bucks tend to be rounder in the evening than in the morning, so the band needed to be adjusted often. With the House of Bacchus aprons, they tended to be a little long for Nigerian Dwarfs since they are made using the proportions of standard sized goats. The Nigerian Dwarf bucks needed a larger apron, so a bigger size, but then it was too long until they grew into it. For adult bucks, their final apron size was too long, so we requested a custom length. In the House of Bacchus sizing, the x-small typically fits bucklings that are 2-3 months old. From there they typically wear the small until they are around adult size, and then wear a shortened medium. Although the proportions were not perfect for Nigerian Dwarfs, we were able to work with them and have used them successfully.

There is also another company that makes them with different models, but I have not purchased from them. They appear to have a little more coverage, however; I have not tried them personally. They are Buck Apron.
Concerns with using aprons?

When researching the use of aprons, many people (who hadn't tried it) said that the bucks will harass the does, but that hasn't been the case in my experience, nor that of many others who have tried using aprons. Some people who tried this with older bucks that had previously been kept separate from does said that their bucks were very excited about the does at first but calmed down after a while. We added a 5-year-old buck to our herd, who had never lived with does, and he settled in well with the herd. He has now been in the herd for over 2 years. I have sold adult bucks who lived with the does here, and they all settled in very quickly.

​Another often mentioned comment is the fear that the buck smell will affect the taste of the milk. This has not been the case for us. The milk tastes very sweet. The udder is a closed "compartment" and smells cannot taint the milk inside. The only way for milk taste to be affected by bucks is if they rub on the doe and the udder and hands are not completely cleaned before milking. The buck scent could be transfered to the milk by your hands (buck smell is hard to wash off).

​Our older adult bucks only have a very light smell (and I have a very strong sense of smell) if you smell their heads up close. Otherwise, you do not smell them at all. My theory is that since they live with the does, they do not need to "project" their scent, so they do not need to smell as strong. Every other buck that I have visited smells from very far away, but not mine. Even my buck that I purchased as a 5 year old smelled more strongly when I got him than he did a few months later, even in rut. Being with the does definitely seems to calm them down (assuming you allow them time to settle in if not raised this way since kids).