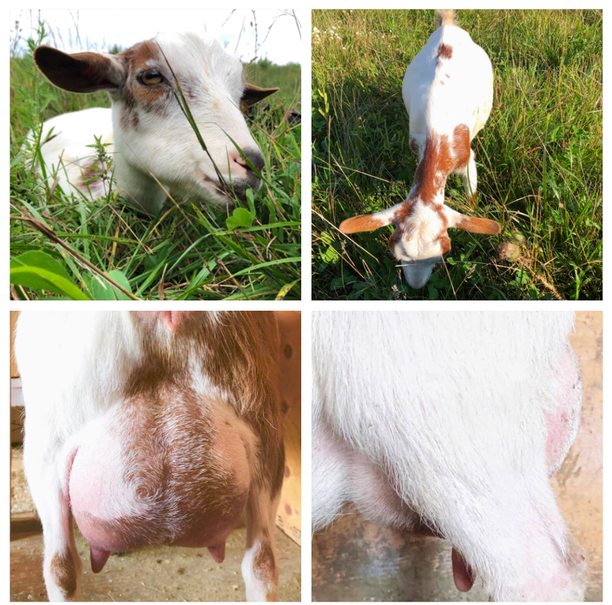 Potting Shed BM Sapphire is a stunning white doe with auburn red markings and brown eyes. We are very happy to have her in our herd! She is a small doe, only about 18.5" at the wither, but her udder doesn't know that! She has a beautiful udder with strong attachments. She produced around 2-2.5L as a second freshener.

Sapphire comes from amazing show and production lines. At least two of her full sisters and two half-sisters, have earned their milk stars. Her littermate sister was classified as VG 85 as a 2 year old, where the maximum score at that age is VG 89.

​Two of Sapphire’s quadruplet sisters won 1st and 2nd place in their age groups at the Winter Royal Agricultural Fair in 2017. Sapphire’s half sisters have done well in the show ring as well. Sapphire's dam won first place in her class at the Dunville Fair in 2018. Sapphire’s grand-dam, Potting Shed FG Maxie, is part of Potting Shed's foundation herd. She was shown twice in 2016, both times winning 1st place, and once best udder. This year, she won 1st place and the Grand Champion award at the June 2017 East National Show. She also won 1st place and best udder in her age group at the November 2017 Royal Fair. Maxie is one of their top milk producers. As a 3 year old, Maxie produced 6.8lbs of milk at her peak, and was producing 4lbs of milk 13 months into her lactation! Her offspring also produce a lot of milk, as well as having long lactations. This is certainly the case with Sapphire's dam, Potting Shed LH Dorothy Mae, since she fed quadruplets until over 5 months old, and once we brought home Sapphire, she continued feeding her 3 other doelings until over 9 months old! In 2017, Dorothy Mae got a linear appraisal (LA) score of Very Good 84 (the maximum at her age was Very Good 89 - the scores often increase after a few freshenings), even though her udder wasn't as full since she was still nursing her 4 four month old doelings. Since then, she has won her class at the 2018 Dunville Fair Goat Show. Sapphire’s grand-dam Maxie received Excellent 91 at 4.5 years old. Sapphire’s maternal aunt, Potting Shed AYI Brooklin sold for $2,150 as a doeling at the 2017 Elite Dairy Goat auction! Sapphire's great grand-sire, Kaapio Acres LS Fireglow, was classified as Excellent 94, an incredible score. Her great grand-dam, Fairlea Marguerite 4*M was classified at EEEE91.

Sapphire's sire is Dragonfly SM Birdman, a US imported buck from wonderful bloodlines. The Dragonfly herd name is well known, both in the United States and Canada, for the high producing and great conformation goats that they produce. Dragonfly SM Birdman won Grand Champion and earned a full leg towards his permanent championship at the 2018 Central Ontario Buck Show. Dragonfly SM Birdman’s triplet sister, Dragonfly SM Linnet, was also evaluated at VEEE90 and has done very well in the show win, including a Grand Champion award. His half-brother, Dragonfly SM SugarCain, was classified at Excellent 90. Birdman’s daughters do well in the show ring. His dam, SM3Pines Juren’s Snowbird, out of a *M doe, has earned a Superior Genetics designation, which means that she is in the top 15% of this breed and was classified at VEEV 90. Two of her daughters have also earned the Superior Genetic designation and milk stars (Sapphire's aunts). Although Snowbird was not shown, her twin sister, SM3Pines Juren’s Sugar Glider, won at least 6 Grand Champion awards, 4 Reserved Grand Champion awards, and 2 Best Udder awards. She also has a 2*M milk star and was appraised at VEEE 90. She also has a Superior Genetics award and is a Permanent Grand Champion. Both of his grand-dams have milk stars, including one who is also a Permanent Grand Champion, and his grand-sire has many show ring wins.

Sapphire's dam's first freshening, without fill time.
​Sapphire is the doe behind her dam in the first picture. Newborn Sapphire can be seen nursing in the second picture.
Photos courtesy of Potting Shed 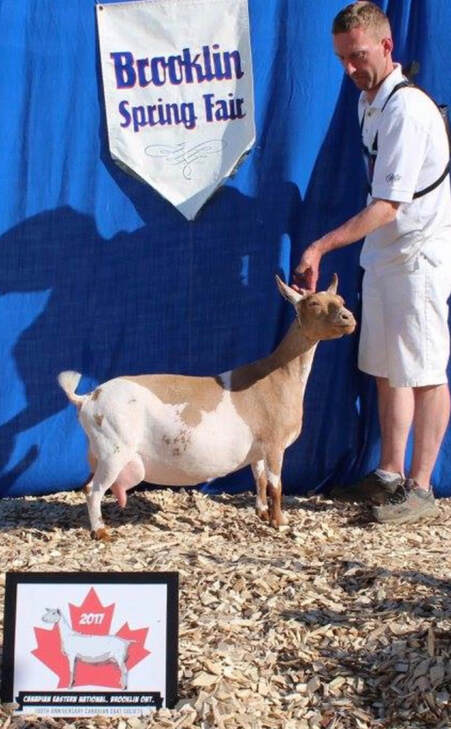 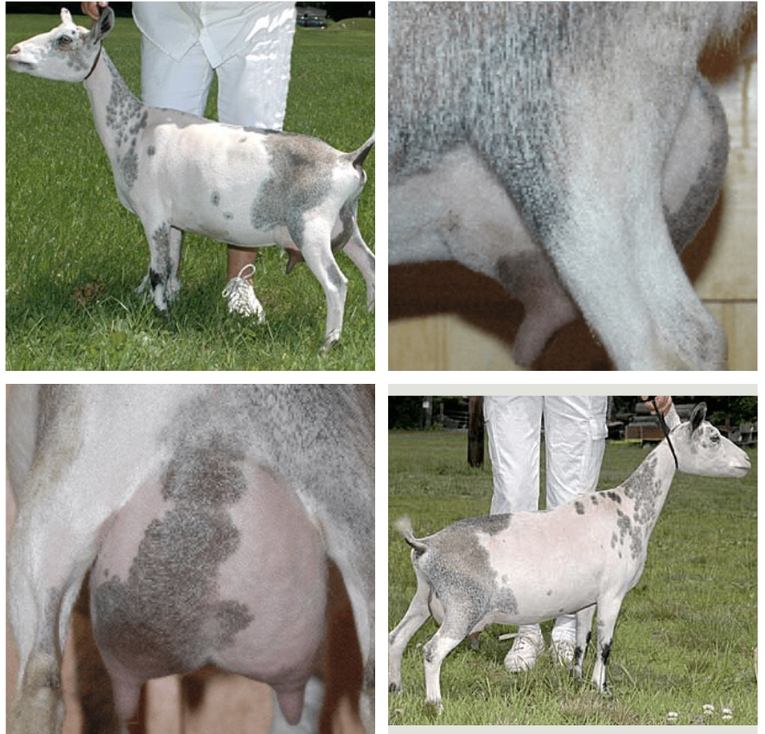 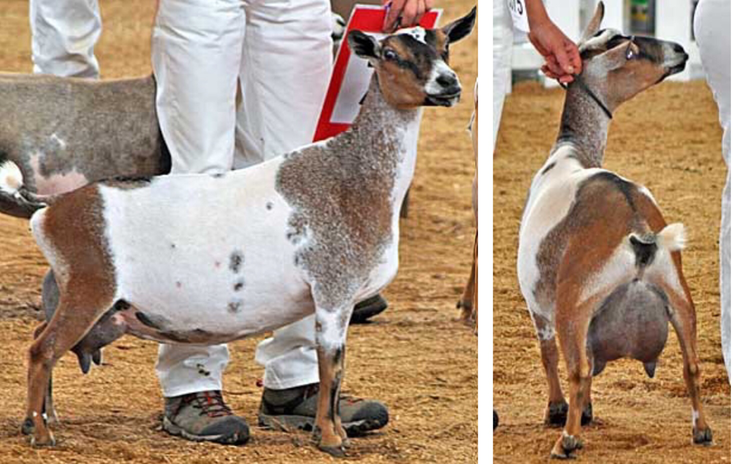 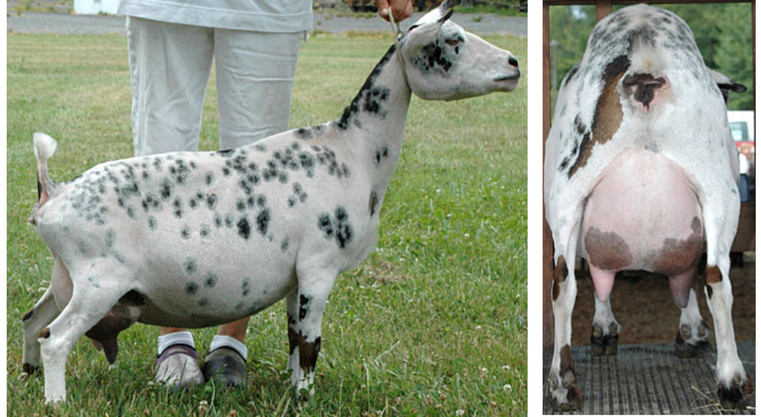 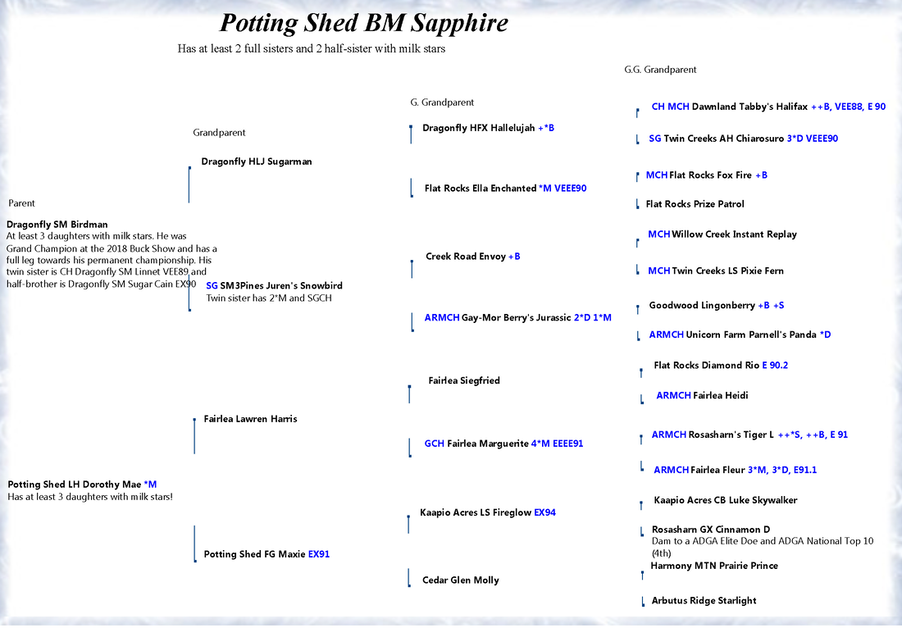