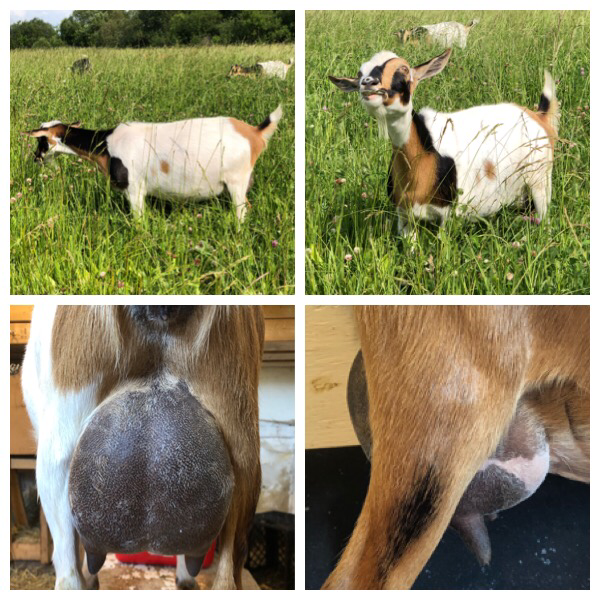 Potting Shed KAJ Knautia (pronounced k-no-tee-a or no-tee-a), named after a flower, is a gorgeous buckskin doe with extensive white overlay. She comes from incredible genetics. Knautia is very long and dairy. She is very promising as a FF, with a good teat size and very soft udder texture, and we cannot wait to see her second freshening!

Her dam, Potting Shed Jackson Triggs was classified at VG86 as a 2 year old second freshener (the maximum at her age is 89) and produces a lot of milk! She is feeding quadruplets and still needs to be milked daily! Knautia's maternal grand-dam, Potting Shed FG Myrna is a Permanent Champion and was classified at Excellent 91. Myrna’s sister produced 6.8lbs of milk per day at her peak during her 4th lactation! Knautia's grandsire is Fairlea Ay Jackson, a US imported buck, classified as Excellent 92. His dam is the 5th generation of does to classify as Excellent (EEEE 91) and to earn her milk star (5*M). She also won the title of Permanent Grand Champion. Fairlea Ay Jackson’s twin sister, Fairlea Irene, also earned her milk star (6*M) and was classified at VVEV 87 as a first freshener, and VVVE 89 as a second freshener. She was shown once, as a junior doe, and won Junior Grand Champion.

Potting Shed KAJ Knautia's sire, Kaapio Acres HH Jackmanii, is also a US imported buck from a well-known herd. His sire, Kaapio Acres Hot Habanero, is a Permanent Grand Champion and is also a +B buck, meaning that he has produced at least 3 daughters from 3 different dams who have earned their milk stars. His half sister, SG Kaapio Acres HH Redemption 1*M VEEE90, is 6th for milk and butterfat production in the US 2017 ADGA Nigerian Dwarf Breed Leaders list. She milked 1320lbs in 305 days - a huge accomplishment! In 2016 she was the ADGA Elite doe and in the ADGA National Top 10 305 list she was 4th in production, 6th in protein. She was also the 2017 Breed Leader for AGS (tied with another doe), milking 6.8lbs in a day. In 2015, she set a record as Breed Leader AGS Overall Score 108.34. She also set a record in 2014 as the AGS Breed Leader with a production of 8.1lbs in a day. As a first freshener in 2012, she was 1st is overall score, 3rd in production, and 7th in butterfat in the AGS Breed Leader list. She also received the ANDDA Sue Rucker Gold JuJu Award for 2013-2017. All her daughters have earned their milk stars, a place on the advanced registry, and several being in the US National Top Ten. One of her daughters milked 1295lbs as a first freshener and anther was a ADGA Elite doe. As you can imagine, we are very happy to have Knautia who is closely related to her!

Kaapio Acres HH Jackmanii's dam, Rosasharn SP Honey Locust, is the daughter of the wonderful Rosasharn's Buckwheat Honey, who is in the advanced registry, a permanent champion, a superior genetics doe, and has earned her milk star, on top of classifying at EEEE91!

Potting Shed KAJ Knautia comes from a line of high producing does with long lactations. She has many incredible goats in her pedigree, which can be seen below. 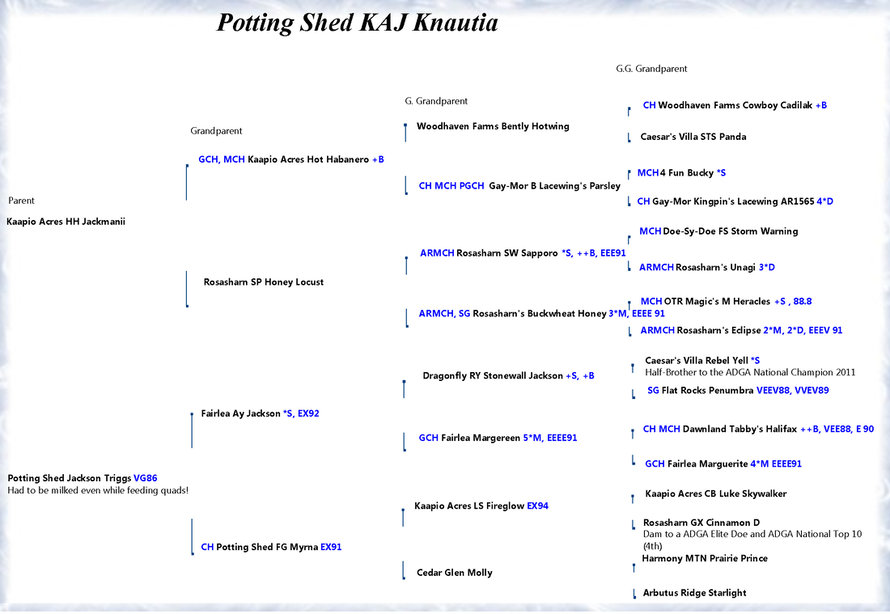